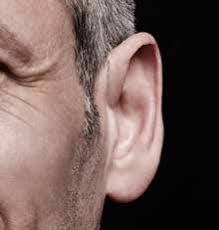 Receiver and ear wire retention can be an issue for instant fit receiver in the canal (RIC) hearing aids. A new receiver/ear wire combination (Widex EasyWear) has been created to address this issue with instant fit tips. The wire and receiver have been sealed together to improve resistance to moisture.The wire exits the housing from the side instead of the back of the receiver housing.

The wire has been reshaped in order to promote better retention in the ear canal without the use of an anchor. The more secure fitting will promote more consistent use for the wearer and less aggravation by having to repeatedly push the receiver back into the canal. The overall length required for the wire is also reduced due to the new shape.

34 adult hearing aid users, who reported lateral migration or cosmetic gaps during their clinical care, participated in this study. The subjects were divided into two groups: Group 1 consisted of 22 current Widex RIC users; Group 2 consisted of 12 non-Widex RIC users. Both groups were equivalent in terms of mean age (70.0 and 72.4) and years of hearing aid experience (4.0 and 3.8 years).

PATIENT EVALUATION
Current Widex RIC users (Group 1) and non-Widex RIC users (Group 2) were asked to evaluate their own RIC hearing aids for three days. The subjects were given a survey to evaluate the hearing aids in terms of physical fit, stability, lateral migration, itching, appearance, and overall impression. They were also given a manual counter to count the number of times they felt the need to push the receiver back into their ear canal.

The data collected from the Subjects’ surveys using a Likert scale (0 to 10 with 10 representing the best response and 0 indicating the worst response). A related sample Wilcoxon Signed Rank test revealed statistically significant (p>0.05) preferences for the new EasyWear over either the older design Widex RICs or non Widex RICs for physical fit, stability, lateral migration, itching, and overall impression. There was no statistical difference between the older designed Widex RICs and the non-Widex RICs.

The situations that produced lateral migration for each of the subjects indicated the mean number of migration occurrence using the older Widex RIC was 15 compared with only 2 for the new EasyWear.

The new Widex Easywear ear wire design reduces lateral migration and cosmetic gaps when compared with standard ear wire solutions. Both the subjects’ and clinicians’ data indicate that while there was no significant preference seen between the older designed Widex RICs and non-Widex RICs ear wire solutions, there is a clear, statistically significant preference for the new Widex EasyWear over the older Widex RICs and non-Widex RICs