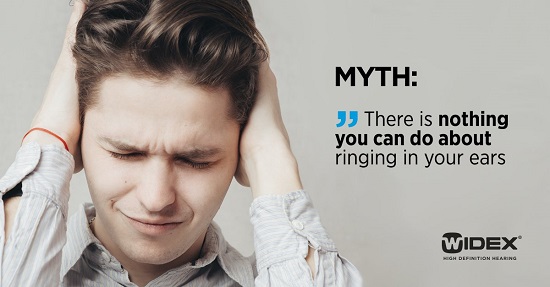 Tinnitus is the perception of sound when no corresponding external sound is present. A common problem, tinnitus affects about 15 to 20 percent of people. Tinnitus isn’t a condition itself, it is a symptom of an underlying condition, such as age-related hearing loss, ear injury or a circulatory system disorder.

Tinnitus may be present all the time, or it may come and go. Although bothersome, tinnitus generally isn’t a sign of something serious. Tinnitus can worsen with age. Treating an identified underlying cause can sometimes help. Other treatments can reduce or mask tinnitus, making it less noticeable.

People describe tinnitus in their head or ears as hearing the following:

Tinnitus can vary in pitch from a low roar to a high squeal, and may be heard it in one or both ears. In some cases, the sound can be so prominent that it may interfere with one’s ability to concentrate or hear environmental sound.

The American Tinnitus Association estimates that over 50 million Americans experience tinnitus. Of those, many also suffer some amount of hearing loss. Many may not even be aware of the hearing loss, or it isn’t their primary concern; the tinnitus is.

When hearing loss is present, there is reduced neural stimulation presented to the auditory cortex (the hearing processing part of the brain). The current consensus about the origins of tinnitus is that this lack of stimulation (auditory deprivation) will cause the brain to overcompensate for the lack of stimulation, and cause extra activity or neural impulses in the brain, which the brain interprets as sound.

Many people who experience tinnitus will naturally get used to it (habituation). Many get used to all types of sounds during our daily lives. An example could be not being bothered by traffic noise, even if living near heavy traffic. Some tinnitus sufferers are not able to get used to or accept their tinnitus, and this can negatively affect their quality of life.

Before we get to the process of WZT, let’s discuss “Zen Tones“. Zen tones, as the name might imply, were first introduced to offer the possibility of activating a relaxation program in Widex hearing aids. What is special about these tones is that they are based on musical properties. Music can induce relaxation, by eliciting a physiological response; but on the other hand, music can also stir up negative emotion or can grab our attention and distract us. In some cases this might be good thing (or not), in the case of tinnitus management, we want tinnitus suffers to achieve habituation (acclimation).

To achieve habituation, Widex needs to ensure that the person listening to the tones does not get hooked on them. That is, we want them to listen to the Zen tones, passively, as opposed to actively. So, for that reason, Zen tones were designed using fractal technology, and they mimic the properties of music, the musical “rules”, so to speak, but without being predictable, or eliciting emotion. Fractals can generally be defined as something with a never-ending pattern, so when applied to Zen tones, it means that the melody generated will never be exactly the same. This is a fairly innovative solution.

Widex teamed up with Dr. Robert Sweetow, an expert in the field of tinnitus management, and Widex Zen Therapy was born. Widex Zen Therapy is also known as an integrated tinnitus management protocol, because it integrates four individual components, which can be utilized all together, alone, or in any combination; as long as it meets the client’s needs. So let’s look into this in more details.

As mentioned before, the main objective of the Widex Zen Therapy protocol is to ensure that tinnitus does not negatively affect the client’s quality of life. How to achieve that? Well, let’s look at the four components of WZT:

Depending on the needs of the individual, the clinician can assess which of these components should be part of the treatment plan. 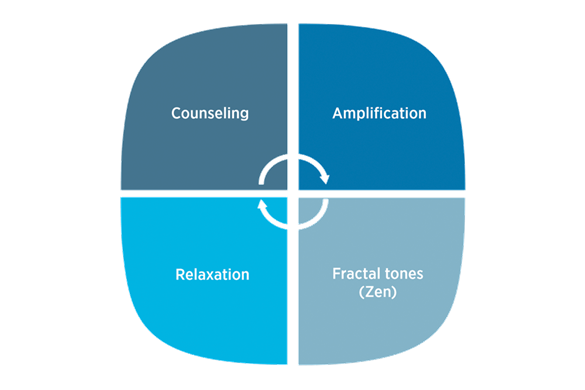 When tinnitus sufferers make their way to their hearing care professional for guidance about what to do about their tinnitus, they may have varying degrees of “reactions” regarding their tinnitus. Some may have a very strong negative reaction, but many will just be slightly or moderately bothered by it.

We need determine how much the tinnitus is affecting one’s quality of life. For clients who don’t have a significant emotional reaction, counselling about the origins, cause and course of the tinnitus, plus amplification (if a hearing loss is present) may be enough.

The hearing aid will provide sound stimulation, which helps reduce the contrast between their tinnitus and the silence, and for some people that might be enough to start paving the way towards habituation. Others might have a stronger negative reaction and may be feeling stressed or anxious, and get caught in the vicious tinnitus-stress cycle.

This app can be used in two ways: as an educational & sound stimulation tool or as a supplement to a treatment plan. The app can help reach those who have tinnitus but who either don’t have a hearing loss or have not yet made the step yet to treat their hearing loss.

The app is currently available in the USA and other selected countries. To find out if the app is available in your respective country, please check your App Store/Google Play store, or ask your HearSource representative.

PrevPrevious ArticleAre the Sale of Hearing Aids Online or Mail Order Legal?
Next ArticleHow to Connect Widex Beyond Hearing Aids to an iPhoneNext